The Journey to the West, Books 1, 2 and 3 (in Traditional Chinese)

The Journey to the West, Books 1, 2 and 3 (in Traditional Chinese)

This book is a compilation of the Traditional Chinese versions of books 1, 2 and 3 in our Journey to the West series of story books for people learning to read Chinese. The three stories told here – Rise of the Monkey King, Trouble in Heaven, and The Immortal Peaches – are unchanged from our original versions except for minor editing and reformatting.

These three stories all focus on the adventures of Sun Wukong, the Handsome Monkey King, is one of the most famous characters in Chinese literature and culture. His legendary bravery, his foolish mistakes, his sharp-tongued commentary and his yearning for immortality and spiritual knowledge have inspired hundreds of books, television shows, graphic novels, video games and films.

Our first story, The Rise of the Monkey King, covers the events in the first two chapters of this epic story. We learn how the little stone monkey is born, becomes king of his troop of monkeys, leaves his home to pursue enlightenment, receives the name Sun Wukong (literally, “ape seeking the void”) from his teacher, and returns home to defend his subjects from a ravenous monster.

The second story, Trouble in Heaven, covers the events of chapters 3 and 4 in the original epic. Things begin to unravel for Sun Wukong, as he starts to see the consequences of his outrageous actions. While trying to defend his monkey troop, he manages to offend the underwater Dragon King, the Dragon King’s mother, all ten Kings of the Underworld, and the great Jade Emperor himself. Finally, goaded by a couple of troublemaking demons, he goes too far, calling himself the Great Sage Equal to Heaven and setting events in motion that cause him some serious trouble.

In the third story, The Immortal Peaches, we wrap up the story of Sun Wukong’s early years, before he joins the monk Xuanzang’s little band of travelers and journeys to the West. Once again, the Monkey King’s unlimited ambitions and uncontrolled appetites land him in deep trouble. He is given a job in heaven taking care of the Emperor’s Garden of Immortal Peaches, but he can’t stop himself from eating all the peaches. He impersonates a great Immortal and crashes a party in Heaven, stealing the guests’ food and drink and barely escaping to his loyal troop of monkeys back on Earth. And in the end, he battles an entire army of Immortals and men, and discovers that even calling himself the Great Sage Equal to Heaven does not make him equal to everyone in Heaven. 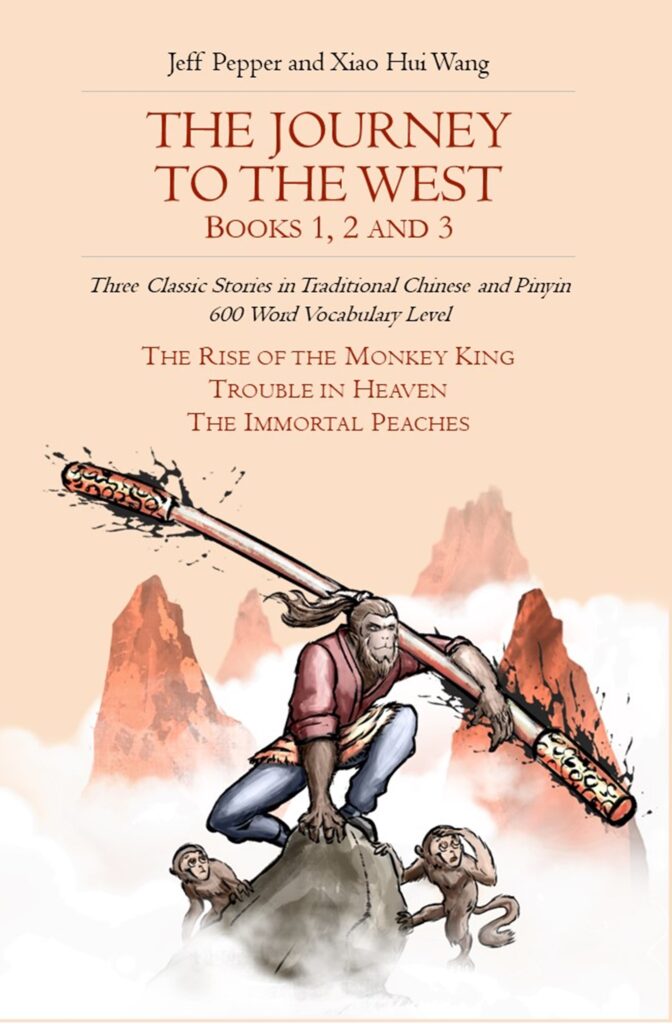