This book is a compilation of books 4, 5 and 6 in our Journey to the West series of story books for people learning to read Chinese.The three stories told here – The Young Monk, The Emperor in Hell, and The Journey Begins – are unchanged from our original versions except for minor editing and reformatting.

In The Young Monk, we tell the story of Xuanzang, the monk chosen by the Buddha to undertake the dangerous journey westward to India and bring sacred wisdom back to China.  Unlike the previous books which told of Sun Wukong’s great adventures (and misadventures) across heaven and earth, this story deals with smaller, human-scale events and the traditional themes of love, loyalty, treachery and revenge.  Our story begins with the Buddha’s decision to bring his wisdom to China.  Then we meet the young couple – Guangrui and Wenjiao – who become Xuanzang’s parents.  We witness their terrible ordeals around the time of Xuanzang’s birth, and we then jump ahead to when he turns eighteen, learns of his true parentage, and avenges his parents.

The next story, The Emperor in Hell, tells the last story leading up to the start of the actual journey to the west in Book 6.  While this book has some light moments, it also has some of the darkest and most frightening scenes of all the stories we’ve told so far, with a series of horrifying visions of after-death punishment of evildoers that are reminiscent of those in Dante’s Inferno.  The story starts innocently enough, with two good friends chatting as they walk home after eating and drinking at a local inn.  One of the men, a fisherman, tells his friend about a fortune-teller who advises him on where to find fish.  This seemingly harmless conversation between two minor characters triggers a series of events that eventually cost the life of a supposedly immortal being, and cause the great Tang Emperor himself to be dragged down to the underworld.

The final story, The Journey Begins, marks the end of the first section of the novel, as we wrap up the preliminaries and begin the actual journey.  Several threads and key characters from earlier books come together.  Taizong, the great emperor of the Tang Dynasty who spent most of Book Five trapped in the Underworld, selects the young monk Xuanzang to undertake the journey after being strongly influenced by the Buddhist teacher Guanyin. Xuanzang (now called Sanzang) sets out on his journey and receives help from Guanyin and from Bright Star of Venus, who previously appeared in Book Two.  The Dragon King of the Eastern Ocean, who in Book One was Sun Wukong’s adversary and was forced to give him his Jin Gu Bang (golden hoop rod weapon), is now Sun Wukong’s old friend and gives him some life-changing advice.  And near the end of the book Sanzang’s path crosses that of Sun Wukong, and the young monk and the old monkey work out their differences (more or less) and become the first two members of the band of travelers. 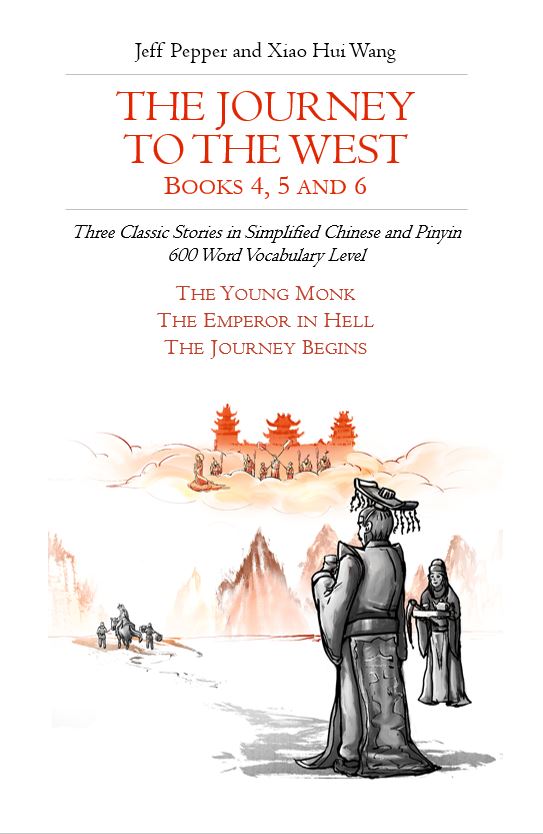