This book is a compilation of books 7, 8 and 9 in our Journey to the West series of story books for people learning to read Chinese.The three stories told here – The Monster of Black Wind Mountain, The Hungry Pig, and The Three Beautiful Daughters – are unchanged from our original versions except for minor editing and reformatting.

In The Monster of Black Wind Mountain, we tell the story of the first few months of the journey itself. Tangseng is accompanied by his disciple, the short-tempered Monkey King Sun Wukong. They first encounter a mysterious river-dwelling dragon, then run into serious trouble while staying in the temple of a 270 year old abbot. Their troubles deepen when they meet the abbot’s friend, a terrifying black bear monster.

The next story, The Hungry Pig, we meet the pig-man Zhu Bajie, who becomes Tangseng’s second disciple. In his previous life, Zhu was responsible for the Jade Emperor’s entire navy and 80,000 sailors. But unable to control his appetites, he got drunk at a festival and attempted to seduce the Goddess of the Moon. The Jade Emperor banished him to earth, but as he plunged from heaven to earth he ended up in the womb of a sow and was reborn as a man-eating pig monster.

In the final story, The Three Beautiful Daughters, the band of pilgrims arrive at a beautiful home seeking a simple vegetarian meal and a place to stay for the night. What they encounter instead is a lovely and wealthy widow and her three even more lovely daughters. This meeting is, of course, much more than it appears to be, and it turns into a test of commitment and virtue for all of the pilgrims, especially for Zhu Bajie, the lazy and lustful pig-man.

These stories are written using a limited 1200 word vocabulary.  They are presented in simplified Chinese characters and pinyin, and include an English version and complete glossary. 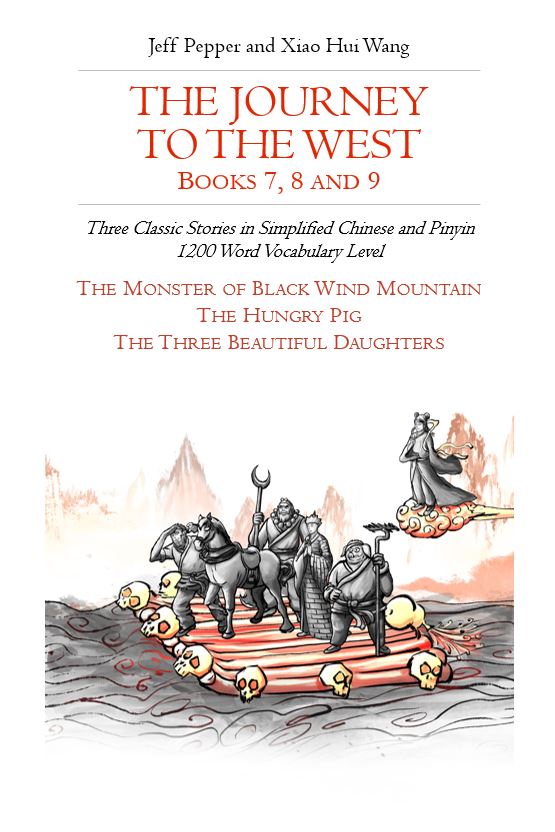